When I decided to make a career change during my PhD studies, I researched and read fervently for two years before finally applying for a job in financial services. I knew nothing about finance or economics up until this point and so began a process of relentless self-teaching and undertaking industry qualifications.

The knowledge I acquired through this process was a combination of mainstream, such as teachings from academic institutions like LSE, and unorthodox, such as Austrian economics. The latter fascinated me with its jargon-busting, powerful intellectual framework. I still remember when I put down the book “End the Fed” by Ron Paul and said to myself “yes, we ought to!” (which was quickly replaced by “no, its not possible“).

One of the proposed actions by Austrian economists to establish a sound monetary system is to bring back the Gold Standard, which was eliminated in 1944 and replaced by the Bretton Wood Agreement. It is quite hard for any living person to imagine a life where you can freely convert your paper money to gold bars at your bank. If one does have such distant memories, he/she would probably be over 100 years old by now.

One of the arguments for this proposal is that governments are inherently irresponsible spenders. Therefore, country balance sheets can quickly spiral out of control if their actions are unchecked and unconstrained, which in turn could bankrupt a country and bring down with it the prosperity of its citizens. Gold bars have historically proven to have a value in any country and currency at any given point in time, whereas “fiat money” can become relatively worthless.

Putting aside which school of economics has intellectual superiority, something the Austrian economists loathe is currently being practiced around the world by central banks in a magnitude that was beyond anybody’s wildest imagination before the Great Financial Crisis (GFC). When “helicopter money” was parachuted into the financial system back in 2008 there were plenty of dissenting voices expressing major concerns about its inflationary consequences in particular.

The term “fiat money”, which is specifically paper notes not backed by gold, was very widely quoted and discussed during the GFC, and gold shined brightly as these discussions and debates gathered audience. However, the much-hyped inflation never arrived and the collapse of “fiat money” is still nowhere in sight, so gold lost its heroic victory and many proponents of the commodity are being increasingly labelled as “gold bugs”.

When “helicopter money” was again parachuted into the financial system after COVID hit, the same debate came back to life with many arguing that this time is different because there is no constraint from fiscal tightening counter-acting monetary expansion. The peculiar thing though is that inflation has indeed ticked up post COVID, but the gold price has trended down (notwithstanding the recent spike). Go figure!

The story of gold is a complex one to tell, for example, despite the commonly held view that gold is an inflation hedge, its historical correlation to inflation spikes suggests that it is an inconsistent inflation hedging tool at best. Gold is also believed to be an indicator of fear and uncertainty, however, the gold price did not move much during 2013-2018 while the world went through serial risks. There is also plenty of analysis showing that factors such as US dollar strength, real interest rates and central bank actions can all impact the gold price and its momentum. 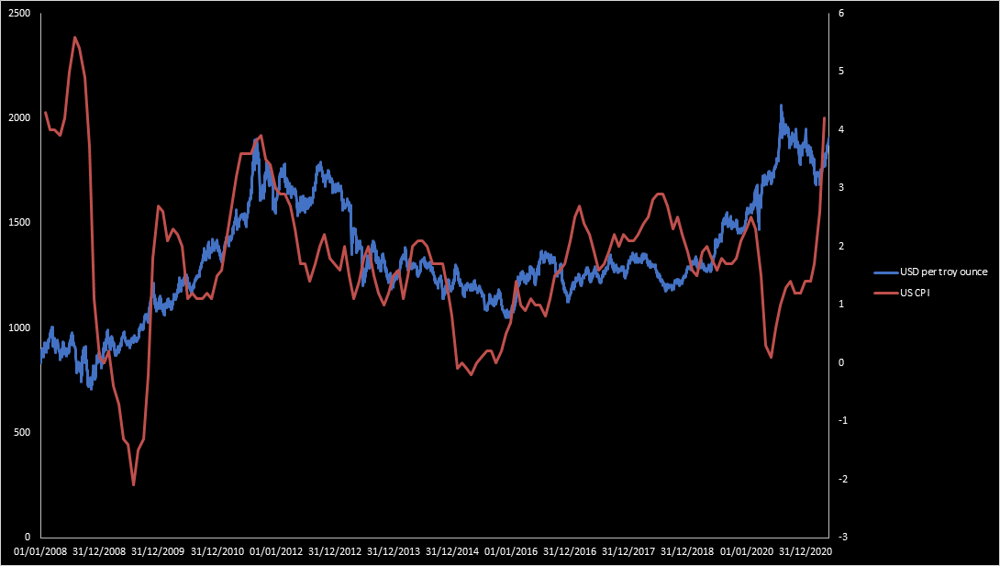 Ultimately, the simple reality is that the world remains trapped in this weird and wonderful land of Oz where the day of reckoning (as a consequence of governments spending way beyond their/our means) is delayed further and further into future.

Gold alone won’t be powerful enough to smash this distorted reality, but may well be an obvious winner when reality finally bites and panic sets in. The world seems yet to be truly fearful of the black hole of quantitative easing, notwithstanding that it is a storm cloud forming over the global economy. Gold is a finite physical asset with some (albeit limited) use as a precious metal, which will invariably offer comfort to asset allocators in troubled times.

At Enhance we are often asked for our view on gold. We provide strategic, long term advice to our clients and therefore we are seldom drawn on providing any kind of short term, trading view. Our role is to decide whether gold, and indeed any asset class, should have a long term allocation in an appropriately diversified and positioned portfolio for our client’s aims and objectives.

Verdict: The old adage of investment returns being generated by time in the market, rather than by timing the market, is one we subscribe to. We are not proactively recommending building a position in gold at present, but maintaining a strategic minority allocation in a multi-asset portfolio remains sensible whilst the world unravels quantitative easing.