Do we dare to act with foresight?

Hindsight; something that is probably loved as much as it is hated by different cultures universally. Every hindsight is either a foresight or oversight before it turns into a reality. How you feel about it depends on which side of the fence you sat.

When I questioned why a GBP portfolio had over 60% in UK assets, enthusiastically recommended ESG solutions, proposed the idea of global – rather than regional – investing or when I challenged Asia being lumped together with other emerging markets, I had conviction but ultimately could not be certain that this was foresight on my part because they were contrarian positions at that point in time.

However, with the benefit of hindsight, it is crystal clear that GBP investors shouldn’t tie their capital to an economy that is not growing its global prominence, that ESG has irreversible thematic momentum, that it shouldn’t matter where a world-class company is listed and that Asia is fundamentally a different economic block to Latam, Eastern Europe, Africa and the Middle East. Luckily, I was on the right side of hindsight in these examples.

So, how will you feel today when I propose that the Chinese market deserves a dedicated allocation in your diversified growth portfolio? Are you thinking ‘of course you would say so, you’re Chinese!’? Or, are you thinking ‘maybe she has a point; what does she see that I am not seeing?’. It certainly isn’t the norm (yet) in most investment proposals I review, therefore a somewhat contrarian position that could prove to be another example of foresight in future.

The Chinese economy is the world’s second largest economy, just after the US. It has been closing the gap, slowly but surely, and it is now forecast that China will overtake the US as early as 2028. Chinese companies already have bigger global market shares in computer technology, digital communication, electrical machinery and semiconductors than the US. Chinese brands are becoming more admired and desired internationally, rather than despised as a symbol for 'cheap and cheerful'. Chinese onshore equity market (the “A” share) is quickly becoming the second largest equity market after the US.

The Chinese bond market is also the second-largest in the world and it offers lower volatility plus a 3-4% yield pick-up compared to US bonds with the same duration. Of course, it is still only one-third or one-half (depending on the source of your data) of the size of the US market but, don’t forget, that the dollar bond has monopolised many investors given its reserve currency status. China’s response? Become the largest holder of dollar reserves globally; a power play to help protect Chinese asset prices.

US assets have been the darling of the show for investors since the global financial crisis, but that doesn’t mean they will deliver to the same extent moving forward. As valuations have ground higher and government debt has ballooned further, many investors are looking for alternative places to park their capital. Value stocks, Bitcoins, Commodities are all currently in vogue, but let’s not forget about the powerhouse that has been driving the global growth in recent years, might it not be a more worthy candidate to consider?

Below provides some context on the size of the Chinese Onshore Equity and Bond Market. 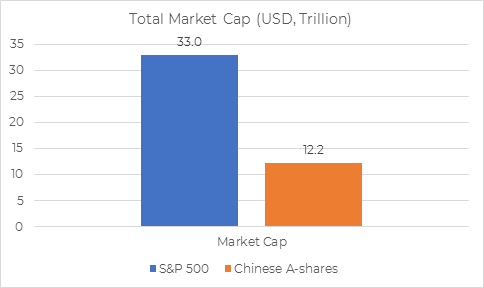 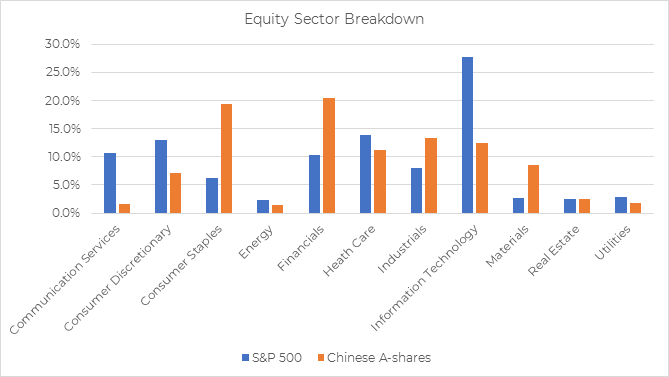 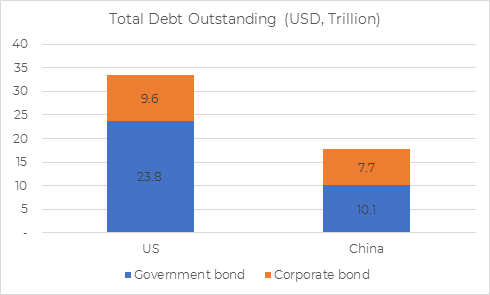 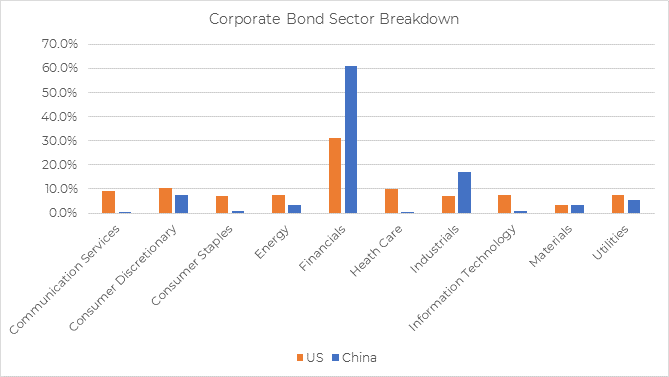 Now that China is ‘open for business’ and closes in on becoming the world’s largest economy, it’s investment case becomes harder and harder to ignore.